BAD REP by A. Meredith Walters

THE GIST: It’s official; I heart A. Meredith Walters! Her ability to make me feel connected to every character, including those I so desperately wanted to hate seemed effortless. I loved it!

Don’t get me wrong, this book will piss you off; between bitchy sorority girls and just plain rude frat boys, you will be left yelling profanities in the privacy of your little reading nook.

Bad Rep had me sitting on the edge of my seat, fanning my face from the sexy heat between main characters Jordan and Maysie, laughing out loud, and screaming in my head at all the dumb choices. Hello!?! Grow a backbone honey and tell those drama queens where to go! Overall this book had me completely hooked on the journey of Maysie and Jordan.

SYNOPSIS: “Who gives a damn about their reputation? Oh, that would be me! Especially since mine had gone straight to hell in the span of thirty minutes.”

Maysie Ardin is soaking up the summer before her junior year of college, shopping, hanging by the pool and shopping some more. But when her black belt in spending lands her in trouble with her parents, she is forced to take a second job at a local bar to dig herself out of a deep financial pit.

She thought she’d be miserable. But then Maysie didn’t count on Jordan Levitt, the hot, pierced and tattooed, drum playing bartender who also happens to be very interested in her. And the feelings are totally mutual.

It had the makings of the perfect romantic set up. Boy meets girl. Boy likes girl. Boy has girlfriend? Okay, maybe not.

But attraction is a hard thing to ignore and soon Jordan and Maysie find themselves in the middle of a gossip induced firestorm. Maysie has to learn whether she can set aside her fear of public disapproval in order to be with the one she wants. Or will she let the opinions of others dictate her life and her heart?

THE LOWDOWN: I’m not typically a fan of snotty, rich, mean girls in a book – waste of time hearing them whine and complain. Yet, A. Meredith Walters portrays these girls flawlessly. I was so happy to see secondary characters get a good description in this book. They play such an important role in the overall feelings that Maysie goes through that it was needed. I had to know that Olivia and her sidekicks were nothing but over achieving sneaky little bitches.

I was unsure at first if I was going to be pulled in with this book as much as I am with some other “New Adult” books. The writing style was fast paced with lots of well written, sometimes hilarious dialogue between characters, that you are automatically drawn to. I was able to quicly picture the pain Maysie dealt with on her own, away from her parents, while still trying to please them. I could imagine the quirky personality of Maysie’s best friend Riley who just didn’t give a damn and I instantly began crushing on Jordan Levitt because of the authors amazing characterization. The tattoos, the piercings, the body…mmmm yum! A total boy toy to add to my book boyfriend collection. What? You can never have just one, my friends! In fact, I could relate to all of the characters, I felt like I was completely immersed in the moment that I wasn’t able to get out. My heart was attached to the outcome – the story of each character – which is a rare.

Oh, and don’t even get me started on the hot & steamy sexy time. Wowzers to your libido! *blushing* definitely not for the faint at heart. Learning about what Jordan could do with that bar bell in his mouth…..mmmm…

Sorry where was I?

In the end, I felt for Maysie and Jordan. I wanted to be pissed off over their push and pull relationship and the drama surrounding them. I wanted to tell Maysie to suck it up and toughen up. She made her bed now lie in it. There were moments I was wishing she would quit with the wallowing in self-pity – life goes on. I felt myself stressing over Jordan’s inability to be a man. Step up and fix what you have broken. But really they were just two people too scared to follow their hearts. It happens, right?

I’m officially a huge fan of A. Meredith Walters. I will definitely be on the lookout for more of her novels. It’s hard to find a book that puts you in the world of fiction, yet throws in some doses of reality too. Romance isn’t always about the happily ever after. Real life has people making stupid choices, has mean girls destroying the reputations of others, and it has people questioning if love is worth it. Bad Rep holds a lot of honesty deep within its pages and I’m glad I could make my first review a positive one!

Thanks Jordan Levitt for poppin’ that cherry! 🙂 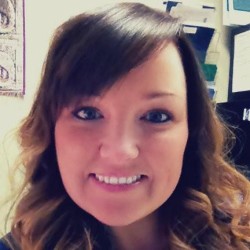