OVERALL THOUGHTS: I enjoyed this book.  It was a bit slow in parts and the heroine was much more complicated then the love interest.  However, it’s a good concept for the story and I enjoyed watching the plot play out.

SYNOPSIS: Emma is content. She’s got a promising career in front of her, great friends, and a pretty amazing family. But her love life has been a little lacking lately. That’s when fate steps in, and she crashes into a tall, dark and handsome man -Teren Adams.

He’s single, successful, an extraordinary gentleman, but he’s also secretive. And some of his secrets are more unusual than most people’s. For instance, he’s a “little bit” vampire. He has fangs, incredible hearing, unbelievable speed, and, on occasion, he enjoys drinking a steaming cup of blood.  But he’s also very much alive. He has a heartbeat, loves steak as well as cappuccinos, and has no problems walking around during the day.

Since Teren acts human the majority of the time, the pros far outweigh the cons in Emma’s book. But when it becomes apparent that Teren’s condition is much more serious than he first lets on, and that being in a relationship with him requires more sacrifices than most would be willing to make, will Emma stay? Is love enough to compensate for a life that will never be anywhere near normal? But then again…what’s normal anyway?

THE LOWDOWN: The book starts out with the budding love story between Emma and Teren.  Slowly we learn that Teren is mixed between human and vampire, and he is currently transitioning to full vamp.   It’s a little Twilight.  Girl meets boy, discovers boy is a vampire, meets boy’s seriously creepy vampire family, and loves him despite the danger he and his family pose to herself.  The roles are a bit reversed in the fact that Emma recognizes the real danger she is in but Teren keeps trying to convince her and himself that the danger is minimal.  I liked how their relationship progresses and I enjoyed the premise of the story.  The logistics and limitations of the mixed offspring from a vamp and a human was a fun concept.  The book kept me on the edge of my seat because I was always waiting for the shit to hit the fan.  The plot took a surprising turn towards the end and I was pleased with the results.  Like Bella from Twilight, Emma proves that she is braver and stronger than I gave her credit for.  Don’t worry, there is no love triangle and my blood thirsty tastes were satisfied with way more action and gore then Twilight ever offered.  The negative is that even though Teren is dangerous he doesn’t have that awesome bad boy vibe that many of the hunky heroes have in this genre.  On the plus side, there are quite a few hot sex scenes to steam up the pages.

FINAL THOUGHTS: It’s the first in a series, but works well as a stand alone book if you want a good read but don’t want to commit to a series. 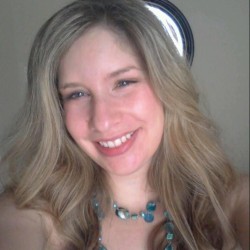