If you’re a writer without a rejection letter, you’re doing something wrong

Do you hear that? Shhhhh! Listen again…

That’s right — NOTHING! Now that my flu is almost gone, I no longer sound like a partially submerged Ford Fiesta backfiring in a swamp! At least not when I cough.

With that, it’s time for an influenza-free edition of my NWOW, which Editor’s Weekly recently called “…something that has become an integral part of our screening process whenever we hire a proof reader.”

But enough accolades! Let’s get to this week’s NWOW, which I’d like to open by sharing a few passages from the many rejection letters I’ve received over the years:

“You are a gifted wordsmith. Try somewhere else.”
(Were they saying I was overqualified?)

“We don’t publish new authors.”
(If all publishing houses felt that way, there wouldn’t be any new material since The Book of Genesis)

“We were close to accepting your submission but decided to pass. Good luck.”
(That made me feel so much better. Like that time I got that HILARIOUS winning lottery ticket that was fake.)

“As Mr. Hefner’s attorney, I’ve been asked to order you to stop writing the girls. You’re only 14 and it’s creepy.”
(Oops! Wrong kind of rejection letter.)

I could go on and on with rejection letters, but it won’t change the fact that, even at age 14, I had a certain level of maturity which I think the Bunnies could recognize and…

I really do have a cabinet drawer at work full of rejection letters from newspaper editors and publishing houses. Many are for my column when I was first starting out. Others are in response to a murder mystery I wrote back in the late 1990s. 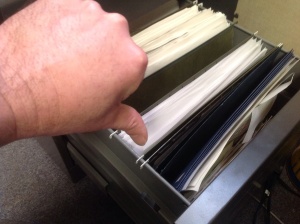 Here is my collection of rejection letter, which my “thumbs down” is pointing to.

In spite of the negative connotation a rejection letter conjures up in the mind of most authors — fine, every author — don’t overlook the more important aspects of what it represents.

To begin with, it means you’ve completed a written work. Given a choice between writing a 500-word essay or being tased in the buttocks, the average person would rather drop their pants than pick up a pen. The fact that you aren’t rubbing a bruised rear means you are a writer (Depending on your genre, of course). No number of rejection letters changes that. Regardless of whether it’s a 400-page novel or an 800-word opinion piece, you have honed and polished your words to the point you are ready to send it out to the world, either in the form of sample chapters, a query, or by pushing the “publish” button on your blog or website. And make no mistake: The “comments” section on your social media site is just another form of “acceptance” or “rejection” notices.

It’s also important to remember that actually receiving a rejection letter, by email or otherwise, means an editor or publisher thought enough of your work to take the time to respond. Even if it’s a letter saying “No thanks, we’ve already committed to publishing a book on Hobbit erotica, but keep shopping this around,” it says something about your writing ability. And maybe the need for professional help — and I don’t mean from an agent. Bottom line: Most editors and publishers are like us, overworked and understaffed. Sending a letter or email takes time and effort. It’s more than just a rejection; it’s also a compliment.

Occasionally, you may even receive some suggestions or advice in your rejection letter, such as “Blowing up the world and having everyone die at the end seemed excessive. I’d suggest finding a more satisfying end to your children’s book.” Keep in mind that I’m not saying you have to agree with any suggestions you’re given. Hey, it’s your novel, short story or magazine article, and you will always reserve the right to have the final word on how it appears in print. I’m just pointing out that if an editor or publisher was engaged enough in your submission to offer some insight, it’s quite a compliment. On that same note, if you keep receiving the same suggestion from different publishers, be willing to at least consider the idea of having “Sally” and “Stubs the Legless Gopher” steal a rocket and depart from Earth before it is reduced to space dust.

Lastly, don’t discard your rejection letters. Keep them somewhere safe as a reminder of your commitment as a writer — and eventually as testimony to what it took to get to where you are. As a father, I’ve shown all my kids my rejection file at some point. When they didn’t make the team; when they were turned down for the dance; when they didn’t get the grade they expected; after I’ve had too much to drink and go on a crying jag about why my mystery novel still hasn’t been published…

You get the idea. We’ve all heard the saying about how you can’t get to where you’re going unless you know where you came from. Or maybe I just made that up. Regardless, rejection letters are as much an indicator of that journey as seeing your work in print. It means you have sacrificed, persevered and believed in yourself. Possibly even threatened to run over an editor or two.

You know, on second thought, I might get rid of those letters. Just in case.

(Ned Hickson is a syndicated columnist with News Media Corporation. His first book, Humor at the Speed of Life, is available from Port Hole Publications, Amazon.com or Barnes & Noble.)

Follow me
Ned Hickson
Humor Columnist at Gliterary Girl
Funny guy Ned Hickson's weekly column appears in dozens of newspapers in the U.S. and Canada as a syndicated columnist for News Media Corporation. He writes about daily life and important social issues, such as glow-in-the-dark mice and injuries caused by overheated pickles. His first book, “Finding Humor at the Speed of Life,” will be released in October from Port Hole Books. Ned lives on the Oregon coast with his wife, four children, and entirely too many seagulls.

Follow me
Latest posts by Ned Hickson (see all)